A properly designed set of aggregates should behave like database indexes, which accelerate query performance but are not encountered directly by the BI applications or business users. Aggregate fact tables contain foreign keys to shrunken conformed dimensions, as well as aggregated facts created by summing measures from more atomic fact tables. Finally, aggregate OLAP cubes with summarized measures are frequently built in the same way as relational aggregates, but the OLAP cubes are meant to be accessed directly by the business users"(source: http://www.kimballgroup.com/data-warehouse-business-intelligence-resources/kimball-techniques/dimensional-modeling-techniques/aggregate-fact-table-cube/).

When working with Oracle Business Intelligence (OBIEE) you often have to deal with aggregates. OBIEE supports using and managing aggregates with Oracle BI Administration Tool in very efficient way. In this and the following posts we will take a bit deeper look:

Let's take a look at how to model aggregates manually. For our exercise we will use Oracle Business Intelligence SampleApp VM (http://www.oracle.com/technetwork/middleware/bi-foundation/obiee-samples-167534.html).

We will start with the following base data schema:

This data schema has already been imported into BI repository (RPD), modelled in physical model like this: 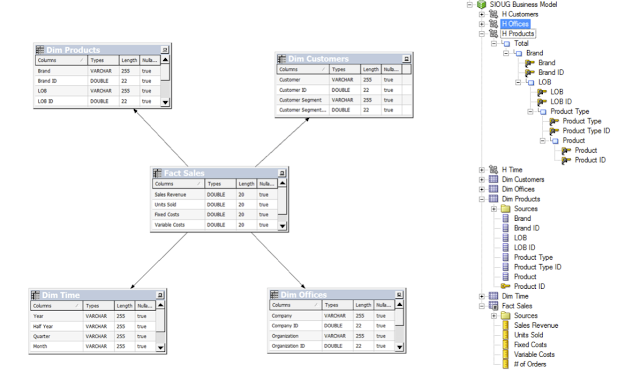 If we create and run a simple query

this would be the result table: 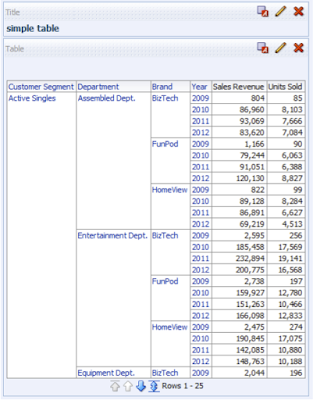 No surprises there, right? Data is read from "base" tables as expected.

Ok. Let's bring finally some aggregates in. For each table in our base data model, we need to create aggregated table at required aggregation level. Let's say that we want to aggregate our data at the following levels: 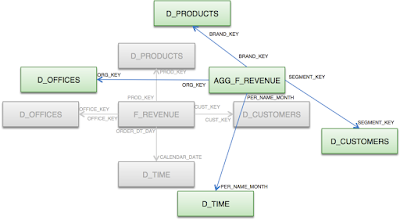 Note that it is necessary to aggregate dimensions too, not only fact tables.

Here are required SQL scripts to create aggregated tables above:

Now, we need to tell OBIEE that new aggregated tables should be used instead of base tables if that is more efficient to executed queries. The other requirement not mentioned so far, but equally important, is that end users are not affected by any changes made (with the exception that queries are run much faster).

The business model should not change ... much. Changes are made at Logical Table Sources where additional logical table sources, new aggregated tables are just added. 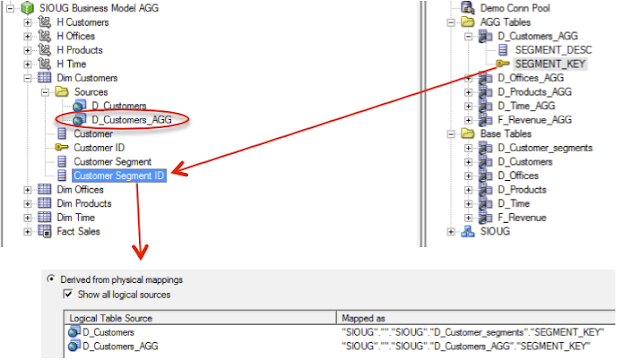 Which logical table source to use is also defined at fact table when we define logical levels:

Let's test it. Create the same query as before:

and run it to get the following result, same as initially: 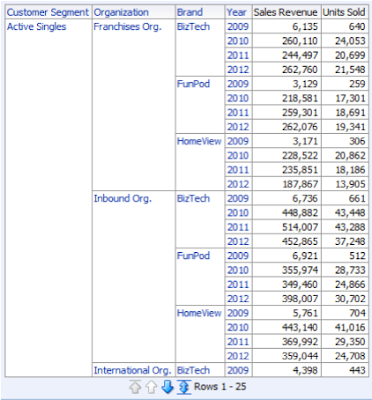 Well check logs again. Observe that SQL which has been generated and executed is now reading from aggregated tables:

If you want to drill down and click on one of possible drill columns: 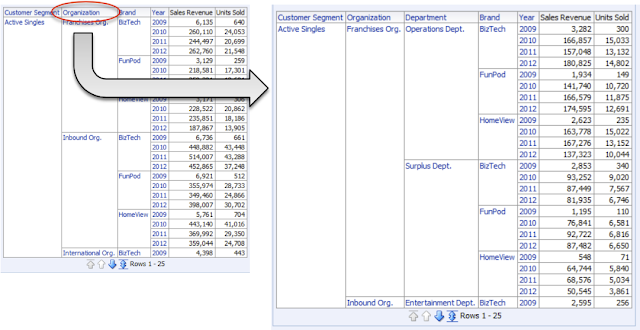 In this case, data is seamlessly read from base tables:

This concludes our first post on how to use aggregates in OBIEE. In the following post we will take a look how to use Aggregated Persistence Wizard and how to use Essbase as our aggregated data store. How Qubix is helping FP&A teams respond to Coronavirus (COVID-19) and the Economic Downturn.

While we are all continuing to learn more about the COVID-19 virus, Qubix is committed to supporting your business through the course of this pandemic, and to... Ward to Board Analytics at Gloucester NHS Trust