Where next for Oracle Essbase Clients?

A Fork in the Road

With Premier Support for Essbase 11.1.2.4 ending in December 2021, Essbase customers are offered a surprisingly large number of choices to move forward on a supported platform:

This post will summarize the options, discuss the pros and cons of each, and present a decision flowchart to help customers decide which option(s) could be right for them.

For 11.1.2.4 customers, upgrading to the on-premises 11.2 release represents the smallest change as the version of Essbase bundled with EPM 11.2 is effectively 11.1.2.4. The key differences from an Essbase perspective are simply support (while 11.2 is the “terminal” on-premises release of EPM, the most recent Oracle announcement is that it will enjoy premier support through 2032) and platform certification; EPM 11.2 is currently certified only on Windows Server 2019. Oracle also describes this version as a “last upgrade” not only because it is the final on-premises release, but also because all new features/changes are intended to be delivered by patch rather than requiring a full upgrade or installation to deploy.

There has been considerable confusion around whether EPM customers will be licensed for “standalone” uses of Essbase, i.e. reporting or other cubes not used directly by an EPM application such as Planning. These use cases have always required customers to purchase Essbase licenses in addition to EPM (i.e. Planning) licenses, but it has not been clear whether those licenses would carry over to Essbase in 11.2. The alternative would be to use Essbase in 11.2 strictly for EPM applications and stand up a separate server running e.g. Essbase 21c for those non-EPM cubes. The latest updates we have received from Oracle (which are not yet reflected in official licensing documentation) is that these use cases will be permitted, but strictly for customers who have current licenses for both EPM and Essbase. For example, if you are a Planning and Essbase customer who has also built standalone Essbase applications, you can migrate your entire estate to 11.2. If you are an Essbase customer who does not also have EPM licenses 11.2 is not licensed to you at all and you must choose another option. This area is complex and we encourage you to contact Qubix to discuss further and get the latest information!

Essbase 21c is the latest iteration of the Essbase “Cloud” codeline, with the key new feature that it is no longer just for Cloud! Essbase 21c has been available as a downloadable installer since December 2020 (Qubix has blogged about 21c elsewhere). This means that there are two Essbase 21c migration paths for existing on-premises customers. On-premises, Essbase 21c is currently available only for Linux (Oracle Enterprise Linux / Red Hat Enterprise Linux 7 and 8), but a Windows Server version is expected within the next few months. On-premises customers also have the option of installing an instance of Shared Services and using an “Essbase Administration Services Lite” to ease the transition from 11.1.2.4 to the new codeline, which did not previously offer either of these features. In the Cloud, Essbase 21c can be installed from the Oracle Marketplace, which while not “hands-off”, does simplify the configuration of OCI resources.

The key advantage of moving to Essbase 21c is simply that this is where the “new features” efforts are being directed by Oracle. For example, the REST API (which offers full coverage of administration, automation and integration processes), the fullest and most advanced Hybrid Mode implementation, and workflow/approvals.

From a licensing perspective, on-premises installations are licensed as existing on-premises installations - standard Essbase Plus and BI Foundation Suite licenses for Essbase will carry across. OCI Marketplace installations can be licensed either Bring-Your-Own-License (BYOL), in which case customers pay only for the infrastructure resources or on an hourly basis, in which case customers pay a higher hourly rate but with per-CPU licensing bundled. Again, for a full discussion of the various licensing and pricing options, contact Qubix to discuss.

The last option for Essbase customers is not exactly an “Essbase” product at all but involves using EPM Cloud Enterprise. Essbase has always been the core “engine” underneath Planning, and some customers have used Hyperion Planning to solve problems that are not strictly “Planning and Budgeting” tasks at all. The Oracle EPM Product team have recognized that there is an appetite for flexible access to that Essbase “engine” in a PaaS package - that is, running on entirely Oracle-managed Cloud environments. Free-Form Planning (FFP) is so-named because it removes most of the required structures that are part of normal Planning applications - for example, mandatory dimensions - while still allowing customers to get at the Essbase engine and build entirely custom applications.

For existing on-premises Essbase customers this move would represent the largest shift, since the FFP toolset is completely different to the Essbase toolset - for example, the use of Business Rules and Calculation Manager, EPM Automate and Planning’s integration tools. From a functionality perspective, the version of Essbase underlying EPM Cloud is not completely transparent, but it is definitely a later / better-featured version than 11.1.2.4, having a more complete implementation of Hybrid Mode for example. The primary reason to favor Free-Form Planning is simply its “packaging”, making Essbase available without the need for installs, manual patches, customer-managed servers (whether in the Cloud or on-premises) and associated overhead. For customers that already license EPM Cloud Enterprise with its per-seat pricing model, the economics of this option may also be attractive.

The options available to existing customers depend partly on their currently licensed products. The following flowchart is intended to provide a helpful starting point to understand both the options and some of the decision points involved: 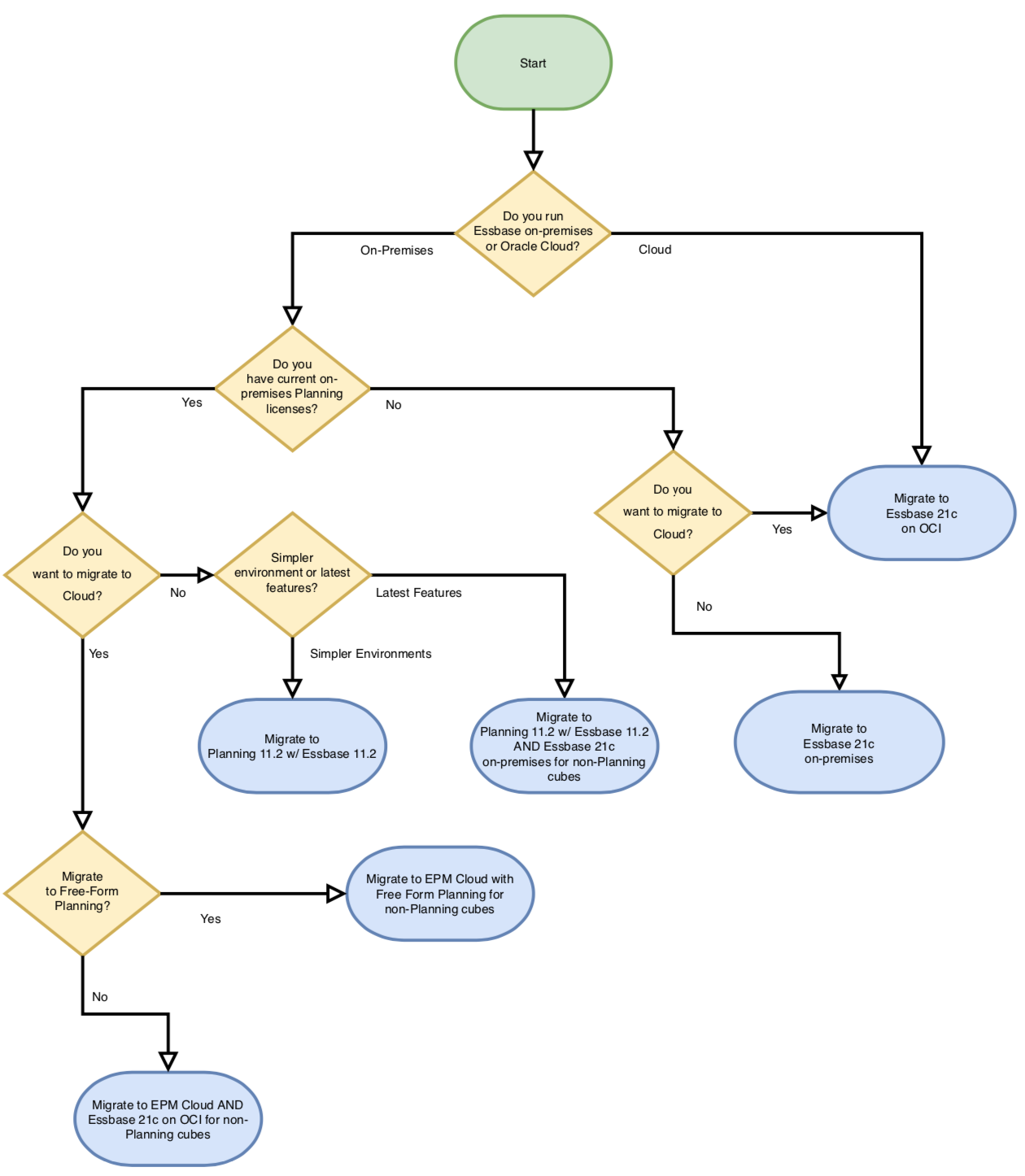 Our team has, collectively, hundreds of years of experience with Essbase, Oracle EPM and Analytics. For expert assistance determining the best path forward to meet your organization’s needs, and a comprehensive discussion of the functional, pricing and licensing considerations, contact Qubix. Read this blog to discover the key highlight of the Oracle Fusion ERP 21B release. Oracle has recently introduced “Reports” to the Oracle EPM Cloud. This blog post introduces the new functionality and the use cases for the new capability.